Cyclists are so annoying! Why don't they follow the rules of the road?

First of all, if you've encountered cyclists behaving poorly, I'm sorry. Cyclists are as beholden to the law as everyone else who uses the roads. Believe me when I say that most serious cyclists are as annoyed as you are with bad actors because they make us less safe.

However, there are a couple things you should also consider. First, are you sure that they weren't following the rules? Cyclists belong on the road, and just because you see us as a nuisance doesn't mean that we are doing anything wrong. Second, if they clearly weren't following the rules (e.g. riding on the sidewalk or blowing through a stop sign), you should report them to the police. Most cyclists welcome better enforcement of the law all around. I certainly do.

Consider this, though: when you're in your car, how often do you see other motorists behaving poorly? How often do you see cars speeding or otherwise driving dangerously? How angry does this make you at drivers? I'm guessing that, beyond a moment or two of frustration, you just let it go. How often do you see well-behaving cyclists and fail to acknowledge it? Is it possible that your confirmation bias makes you more likely to take note of annoying cyclists and to ignore annoying drivers and well-behaved cyclists? Is it possible that the ultimate attribution error makes you more likely to attribute the poor behavior of cyclists to some internal characteristic because you're not a cyclist and to dismiss the poor behavior of drivers as situational because you are a driver? My point is that perhaps you are making overgeneralizations about cyclists, which is not to dismiss the poor behavior of a few among us. Food for thought, I hope.
Posted by Brad Koch at 11:26 AM No comments: 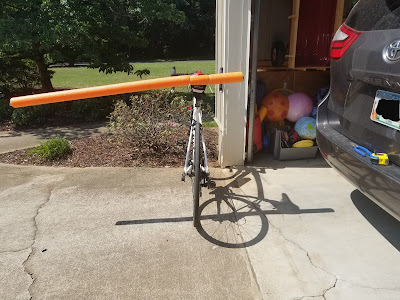 In all, though, it was amazingly effective! I have never been given such a safe berth by all passing vehicles. (One asshole in a sportscar revved his engine and fishtailed as he passed after having to wait for about 20 seconds for oncoming traffic, but even he gave me more than a safe cushion.) The biggest change I noticed was for myself, though. Typically, when I ride, I am always hyper-aware of where I am in the road and whether I can hear vehicles approaching from the rear. With the noodle, I was able to focus more on the ride. I also found that I didn't ever need to edge further left into the lane to discourage vehicles from passing unsafely, for example on a blind hill or with oncoming traffic. Recommended. 👍
Posted by Brad Koch at 10:45 AM 1 comment:

Why don’t cyclists ride single file instead of two abreast on narrow roads so I can more easily pass?

Many cyclists do make an effort when on group rides to ride single file. Typically, though, this is a symbolic courtesy. You’ll remember that giving a single cyclist a safe passing berth almost invariably means that the motorist needs to enter into the path of opposing traffic (i.e. the left lane). Nothing changes in this situation if there are two cyclists riding abreast; the motorist is required to wait until there is no oncoming traffic in order to pass the cyclists safely. This is why the yellow “please ride single file” road signs that some municipalities post are so wrongheaded; they give the misguided impression both that it is cyclists who are causing problems and that it would be safe to pass single-file-riding cyclists in situations when it would not be safe to pass cyclists riding abreast. In short, you may have the impression that it would be quicker and more convenient to pass cyclists in a single file, but this is simply not the case.
Posted by Brad Koch at 6:25 AM No comments:

Here is a simplified decision tree for motorists who find themselves driving near cyclists:

Why didn't I learn all of this back in driver's ed?

That's a good question. Chances are you did learn some of it and, like most of what we all learned back then, have forgotten it. Unfortunately, though, most driver's education curricula focus almost entirely on how motorists should behave around other motorists, ignoring pedestrians, cyclists, and others whom motorists will inevitably encounter while on the road. If you are a person in a position to affect this kind of curriculum--which, hint, includes all of us as voters--keep in mind all that you've forgotten.
Posted by Brad Koch at 5:57 AM No comments:

I just saw a cyclist riding at night. Isn't that unsafe?

Not necessarily. Most municipalities require cyclists who are riding any time between a half-hour before sunset and a half-hour after sunrise to have lights. These should be a solid white lamp in the front of the bike and a flashing red light in the rear. Beyond that, and irrespective of the time of day, it is best for cyclists to make themselves as visible as possible by dressing thoughtfully. At the one extreme is neon yellow and at the other is asphalt gray. Always keep an eye out.
Posted by Brad Koch at 10:36 AM No comments:

Is it OK to text while I'm driving near a cyclist?

It is never OK to text while driving whether one is near a cyclist or not. Driving is an endeavor stocked with risk, and any distraction (e.g. eating, talking on the phone, etc.) increases the likelihood of disaster. Keep your focus on the road where it belongs.
Posted by Brad Koch at 10:15 AM No comments: